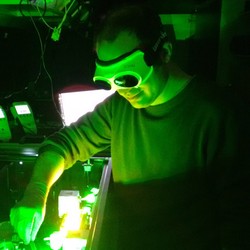 John leads LUPO and is a Professor of Physics at Heriot-Watt University.

He received the M.Sci degree in Mathematics and Physics from Durham University (UK) in 2003, and the M.Sc and Ph.D degree, in 2004 and 2008 respectively, from Imperial College London (UK) where he worked with Prof. J.R. Taylor. For his Ph.D thesis he was awarded the European Physical Society’s Quantum Electronics Thesis Prize (2009). After a period as one of the first Imperial College Junior Research Fellows, he moved to the Max Planck Institute for the Science of Light, Erlangen, Germany (2010) to lead the ultrafast nonlinear optics group in Prof. Philip Russell’s division, and was subsequently promoted to W2 Research Group Leader (2012). In 2015 he was awarded a European Research Council (ERC) Starting Grant. He joined the Institute of Photonics and Quantum Science at Heriot-Watt University as an Associate Professor in 2016 and founded LUPO. He was promoted to full Professor of Physics in 2019.

He has authored or co-authored more than 200 publications, including 4 invited book chapters, 5 invited review papers, more than 50 invited conference talks, and over 70 journal publications. His research has been supported by more than €5m of state and industrial funding.

He is a member of the Optical Society (OSA), the European Physical Society (EPS), and the Institute of Physics (IOP).